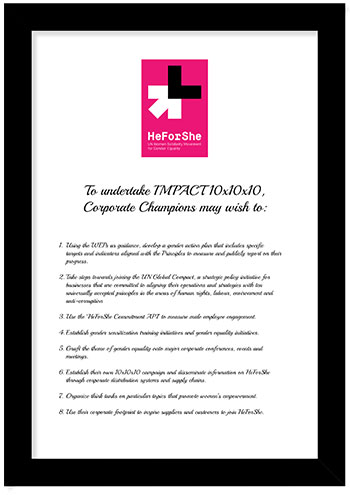 HeForShe (often referred to as He for She) is a solidarity campaign for the advancement of gender equality, initiated by UN. Its goal is to achieve equality by encouraging all genders as agents of change and take action against negative stereotypes and behaviors, faced by people with feminine personalities/genders. Grounded in the idea that gender inequality is an issue that affects all people—socially, economically and politically—it seeks to actively involve men and boys in a movement that was originally conceived as "a struggle for women by women".

Gender Equality has always been an important concern for The New Media Group as its culture often promotes equality for different genders and disability statuses as well. We, the New Medians, have joined the HeForShe movement since 8th July, 2018 the date that movement itself was officially implemented in Mongolia first time.

We solemnly believe that promoting equality between different genders, different races or physicalities as well will bring difference for situations in our country by erasing the difference and delay between Mongolia and the whole world since the big context "Humanity" itself was and is the ultimate value for us all people on earth.